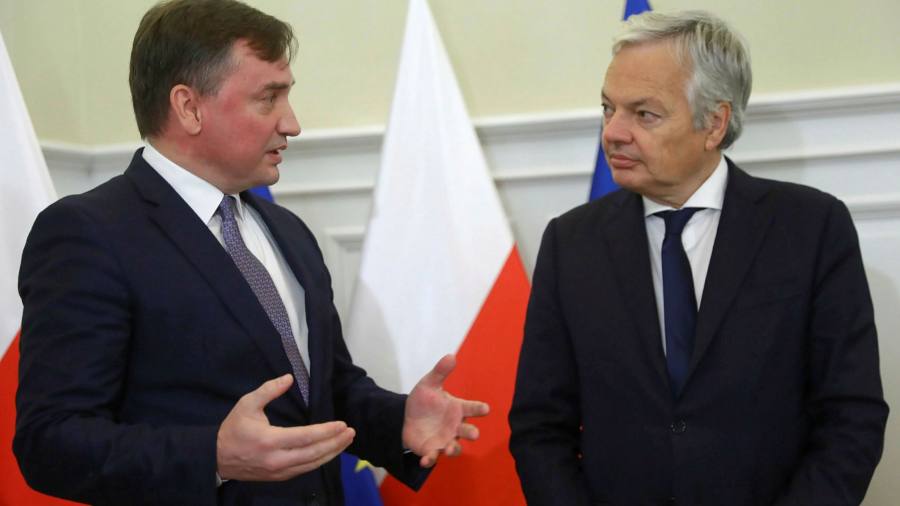 Brussels is set to withhold more than 100 million euros from Poland to cover unpaid fines imposed by the EU’s highest court, the justice commissioner warned, as he responded to “waves” problems in the country’s legal system.

Didier Reynders told the Financial Times on Thursday that the committee would soon send a letter to Warsaw demanding the payment of 69 million euros in accumulated daily fines that Poland accumulated between early November and early this week.

If Warsaw does not comply within 60 days, the commission will withhold fines on EU payments due to Poland, with interest payable in addition, he said.

“We are busy with the five waves for Covid, and I don’t know how many waves on the rule of law in Poland,” Reynders said in an interview. “We keep trying to manage the waves one after the other.

Separately, the committee also prepared to withhold around € 50 million in fines linked to a separate legal dispute involving Poland and the Czech Republic.

Poland is in a long-standing confrontation with Brussels over measures taken by the ruling Conservative Nationalist Party to gain powers over its judicial system, including through a disciplinary chamber with the power to punish judges.

Warsaw was ordered last October to pay daily fines of 1 million euros for failing to comply with provisional measures imposed by the European Court of Justice asking it to suspend key aspects of the disciplinary regime.

The deadlock over judicial independence has soured relations between the commission and the fifth largest EU member state. He also delayed Brussels’ approval of Poland’s plan to spend € 36 billion on grants and loans from the bloc’s € 800 billion post-pandemic recovery plan.

EU officials have said Poland should abolish the disciplinary chamber, change its rules and reinstate dismissed judges as conditions to approve Warsaw’s request for pandemic recovery funding, but negotiations collapsed at the end of the l ‘last year.

Reynders said the letter requesting payment of € 69 million would arrive in “hours or days.” He added: “We have seen that there has been no implementation of the provisional measures, so we will ask [them] to pay.”

If Warsaw does not comply, the daily fines will continue to pile up, triggering new demands for payment from Brussels. A Polish official declined to comment.

Warsaw was also fined around € 50m after failing to comply with an ECJ ruling to suspend operations at a lignite mine, which has been the subject of complaints from the Czech Republic .

The Czech Environment Minister said on Thursday that a draft agreement drawn up in September was acceptable to her government. However, Polish media reported that the Polish government may request adjustments to the draft agreement.

Reynders noted some positive progress made in the rule of law by Poland, in particular regarding a modification of the judges’ pension system, but clarified that the general trend in the country was not encouraging.

“There are negative signals coming from Poland again and again,” Reynders said. He highlighted new disciplinary proceedings against a judge and a request by Zbigniew Ziobro, the Polish justice minister, who asked the country’s constitutional court to rule on a Brussels measure that allows the EU to suspend funding violations of the rule of law.

Regarding Ziobro’s recent threats to stop Polish payments to the EU budget due to the dispute, Reynders said: “The European Union pays Poland more than we get. So, in the end, it’s a very strange game.