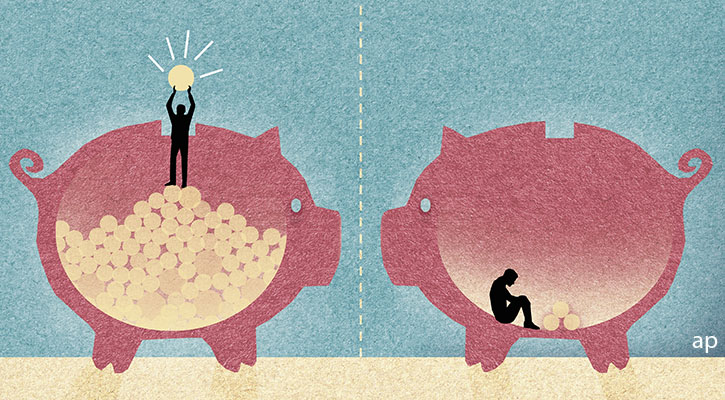 Does money make you happy?

Hetty Green was nicknamed the “Witch of Wall Street”. She earned this nickname partly because of the unique, austere black dress she wore daily, but mostly for her reputation as a contentious and greedy woman whose stingy ways led to her son losing a leg.

During the Golden Age of Wall Street, as the Carnegies and Rockefellers built their fortunes and mansions, Hetty inherited her own small fortune of $5m (£4.35m). Through wise investments, she turned that into over $100 million (over $2 billion in today’s dollars), making her the richest woman in the world at the time. Unlike her better-known contemporaries who left legacies in business and philanthropy, Hetty left a legacy of rigor and self-delusion.

According to the story, when Hetty’s son injured his leg, she could have taken him to the best hospitals in the world, but instead chose to dress in rags and take him to the free clinics. from New York. In Hetty’s defense, she took him to see top doctors, but she didn’t want to pay them, instead learning what hours they volunteered at the free clinics and then visiting them. The time it took to seek out this free treatment led to an incurable case, and rather than treating the leg, the doctors removed it. When she herself suffered from a hernia, she refused to have the operation and used a stick to put internal things back in place if necessary.

Hetty built her fortune by buying undervalued assets and holding them until they were in high demand. She only sold when buyers rushed in and still often turned them away. She also lived an extremely frugal lifestyle. While others built family compounds, Hetty lived in a small apartment. She only bought a new dress when her current dress was worn out.

Some may see Hetty as a model of smart money management, and she was quite a brilliant investor. By any financial measure, Hetty would have been in excellent financial health, but I disagree. She lived simply, but without contentment. She has spent many years of her life in legal battles with her family over assets she believes should have been given to her rather than to charity. Although Hetty objectively had more money than almost everyone in the world, she still believed that she didn’t have enough. She believed in it so strongly that she spent her life and ruined her relationships looking for more.

I tell Hetty’s story because it helps illustrate an important fact: financial well-being isn’t just about the numbers. It’s also about the stories we tell ourselves because of these numbers.

Is wealth synonymous with well-being?

The purpose of wealth is to support well-being, but well-being is not a necessary or guaranteed by-product of wealth. Yes, financial stability can help reduce all sorts of life stressors, and research reveals a positive relationship between income and life satisfaction, but it’s not necessarily true that more wealth will bring better quality of life. The idea that wealth = well-being is a mental shortcut that does not stand up to scrutiny.

To illustrate this point, we conducted a small survey in 2021 where we asked a cross-section of approximately 500 US residents about their emotional experiences with money. People reported how often they felt certain emotions about their finances over a three-month period. There were five positive emotions (joy, peace, satisfaction, pride and contentment) and five negative emotions (anger, sadness, helplessness, fear and stress). For each emotion, they responded on a scale from “Never” to “Constantly” with Never = 1, and Constantly = 5.

We found that people with higher incomes had significantly more positive emotional experiences, as shown below.

There was a clear and positive relationship between income and financial emotions, but that’s not the whole story.

We also asked survey participants about their beliefs and attitudes about money. Specifically, one question asked the extent to which they agreed or disagreed with the statement “I can handle anything that comes my way, financially”, where 1 = “totally disagree” and 10 = “totally disagree”. ‘OK “. This was used to measure their financial confidence, or the belief that they could bounce back from difficulties.

Using this confidence measure, we then grouped people by whether they mostly agreed or disagreed with this statement, and then again examined the relationship between income and financial emotions. The results tell a very different story, as shown below.

In every income group, people who believed they could handle financial hardship also reported feeling mostly positive emotions about their money, and in every income group, those who did not believe they could handle hardship had mostly positive feelings about their money. negative emotions. In other words, trust appears to be more important to financial well-being than income. (For the stats buffs among my readers, the standardized beta coefficients when regressing financial emotions on income and trust were 0.108 and 0.576, respectively, which makes the effect size of trust more than five times that of income.)

In short, when it comes to the emotional aspect of financial health, income matters, but the beliefs we have about money and our own ability to manage it matter more. A person may have a high income, but if their financial mindset is low, they may still have a very poor quality of life when it comes to their money.

Everyone has stories in their minds about their own financial situation, abilities, and status. Some stories are true, some are not. Some are healthy, some are not. By examining and changing our financial beliefs, we can improve our financial health and quality of life, even if our bank account numbers stay the same.

My goal as a financial psychologist is to help people achieve financial wellness wherever they are in their financial journey, even long before they reach their long-term financial goals. To that end, I think it’s important that people develop a sense of financial confidence that’s not tied to their income or net worth, but to their ability to manage resources well, make quality decisions and manage the inevitable setbacks creatively. and grace. These skills can be developed regardless of your current income or net worth.

If your own financial confidence is low, here are some tips to help you believe that you can, in fact, handle whatever comes your way. Some of them are for those who are just starting out and others for those who have already accumulated assets. Take what suits you and leave the rest:

1. You’ve already done it. You can do it again. Think of a time when you experienced a setback in the past. How did you overcome? What safety net or resources have you relied on to help you rebuild?

2. Take stock of your safety net. This includes emergency cash, cash (anything you could find in a week without penalties), unemployment insurance, and even friends and family members who could lend you a hand, a house or moral support if you are going through difficult times.

3. Evaluate your insurance policies. Would increasing your coverage help you feel more prepared in the event of a disaster?

4. Diversify your holdings: stocks, bonds, real estate, cash, etc. By holding many different types of assets, you reduce the risk of losing it all in a downturn. The stock market may crash, but your other assets may be doing just fine, or vice versa.

5. Assess your human capital. If you were to lose your job, the value of your time, skills and experience would not be diminished in the least. You will only have lost one buyer. In fact, the value of your work will likely have increased since you were hired, so losing a position could be a stepping stone to a much better situation.

6. Most importantly, remember that you are more than your money. People who tie their self-esteem to their net worth are more at risk of depression and dissatisfaction with life.

Hetty Green’s example reminds us that wealth alone is insufficient for well-being. A state of mind of lack, bitterness or fear is antithetical to contentment. On the other hand, if your financial attitudes and beliefs are healthy and nurturing, you can experience peace and well-being even in times of setback or loss.