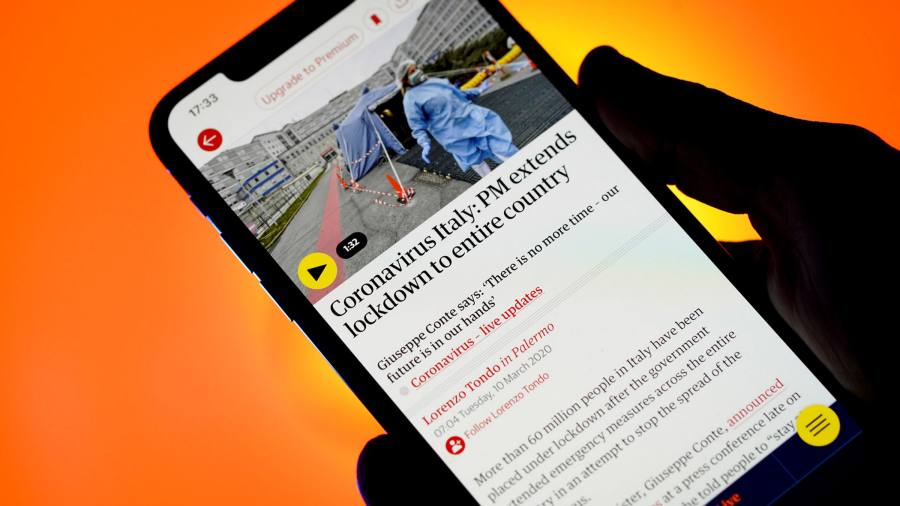 The Guardian is to test a paywall on its news app as part of the latest move to revamp the liberal publisher’s business around reader payments while trying to stay committed to open access journalism.

While the Guardian will keep its website open to everyone, the media group will start charging fees from a sample of regular news app users later this month as it explores the best approach to pricing to put the entire app proceeds behind a paywall.

The measure caps a seven-year journey for the Guardian’s leadership, going from outright hostility to paywalls under former longtime editor Alan Rusbridger to relying on subscriptions and contributions for the majority of revenue under his successor Katharine Viner. A longtime journalist described the transition as welcome but “surreal”.

The Guardian joined the small group of news publishers with more than a million digital subscriptions last year, but on a unique model where most of its “supporters” voluntarily contribute at least £5 a month to free reading information.

Enders Analysis estimated that reader subscriptions, spanning print and online, now account for more than 60% of the Guardian’s total revenue, marking “the most positive turnaround in the provision of English news”. Half of the Guardian’s paying readers are outside the UK.

But underlying tensions remain over the Guardian’s business strategy and governance. These boiled over last summer when Annette Thomas abruptly left her post as chief executive of the Guardian Media Group after losing an internal power battle with Viner, the Guardian’s editor since 2015. Thomas’s successor n has not yet been named.

The Scott Trust, the Guardian’s parent company, has long subsidized the Guardian’s newsroom operations from an endowment valued in 2021 at around £1.1billion. The sustainability of the model was seriously questioned in 2016 when Guardian Media Group slid to a record pre-tax loss of £69m on revenues of just £210m.

Viner led a turnaround plan to cut costs by a fifth, in part by cutting around 450 jobs, including 120 journalists. This helped the Guardian achieve its first operating profit in two decades in 2019, with positive earnings before interest, tax, depreciation and amortization.

However, the Guardian’s business remained cash negative, relying on the Scott Trust to help manage net outflows, which fell to a low of £16m in 2021. The Scott Trust reported in a governance review last year that he now wanted to focus “on long-term investment” in the Guardian rather than “addressing short-term funding needs”.

Staff were told last month that rising revenue from digital advertising and readership had boosted The Guardian’s overall revenue from £225m to over £250m in the twelve months to the end. end of March, its highest level since 2008.

Significantly, the Guardian Media Group returned to a positive cash position for the first time since it started selling AutoTrader around 15 years ago, according to a person familiar with the numbers. The Guardian’s audited results for 2021/22 have yet to be released.

The Guardian currently runs a free app alongside a paid version, which includes more features. The paywall test, which will be “priced” by user and region, paves the way for a single paid application product worldwide.

The Guardian said its journalism “remains entirely free and open to anyone on the web, regardless of ability to pay”.

“In the coming months, we will be testing a measured version of the app as part of our broader product strategy,” the company said. “Our readers know that by supporting us, they’re not only helping to pay for hard-hitting journalism they can trust, but they’re ensuring that journalism can be read for free on the web.”