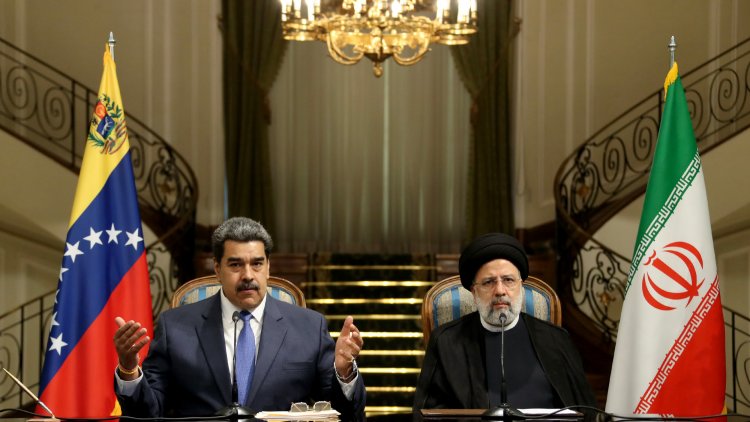 The signing of a 20-year cooperation plan between Tehran and Caracas presents bright prospects for the future of relations between the two countries, according to the visiting Venezuelan president.
“I believe that the future of the friendship between Iran and Venezuela will be very pleasant and intact,” Nicolas Maduro said during a joint press briefing with President Ebrahim Raisi following a meeting in Tehran on Saturday, President.ir reported.
Maduro arrived in Tehran on Friday for a two-day stay as part of an official trip that earlier this week included Turkey and Algeria. He was accompanied by ministers and officials in areas such as agriculture, technology, oil, communications, tourism and transport.
During the visit, the two sides signed a 20-year cooperation plan and discussed other areas of cooperation.
Raisi described Tehran-Caracas relations as strategic and multifaceted, highlighting bilateral cooperation in various sectors, including energy, technical and engineering services, economy, agriculture, military and defense.
“This level of cooperation indicates that Iran and Venezuela have multiple capabilities for expanding their ties,” he said.
The Venezuelan president said his country wants to use the historical experiences of the Islamic Republic and its capabilities in technical and technological fields to help it through its difficult times.
There is a wide range of cooperation sectors between Tehran and Caracas, including oil, gas, refinery and petrochemicals, he added.
In this line, he announced that a weekly air link from Caracas to Tehran will soon be opened, which he believes will help unlock many potentials for bilateral cooperation.
Raisi also said the road would facilitate transportation between the two countries, helping to both improve trade ties and deepen relations between the two nations.
Maduro also hailed Iran’s progress in the agricultural sector despite the fact that around 70 percent of its land is arid and water-stressed.
“One of Venezuela’s priorities for developing its relations with Iran is to use its technologies to improve the country’s agricultural production,” he said.

Maduro then reiterated that Iran and Venezuela will weather the odds and make progress side by side as a new world takes shape.
“The future world will be one of equality and justice and all must contribute to building this future by opposing imperialism,” he said, assuring the Iranian government and people of his full support. and his contribution.
Iran and Venezuela, both sanctioned by the United States, have since 2020 expanded their cooperation, especially for energy projects and oil exchanges, helping the Caribbean nation mitigate the effect of Washington’s measures.
Raisi said Iran’s foreign policy is centered on developing ties with independent countries.
“Venezuela has shown that it opposes imperialism and the threats and sanctions of its enemies and puts up exemplary resistance,” he said.
The fact that Venezuela has contained its hyperinflations and started economic growth, according to its president, is a good sign that resistance is working and forcing enemies to retreat, Raisi said.
The Iranian nation also faced sanctions and threats following its Islamic revolution in 1979, but decided to use them as an opportunity for progress, according to the president.
“When the Americans officially announce that their maximum pressure against Iran has hopelessly failed, it is a point of victory for Iran and defeat for the United States and its enemies.”
Iran was subject to draconian US sanctions after Washington pulled out of the 2015 nuclear deal in 2018.
US officials in the incumbent administration have repeatedly confessed that the so-called maximum pressure campaign had failed and began indirect talks to join the deal last year.