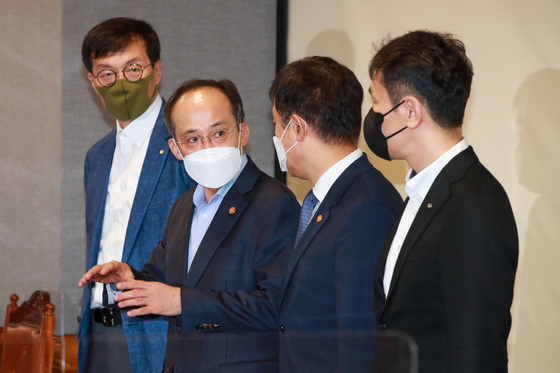 Bank of Korea Gov. Rhee Chang-yong, far left, and Finance Minister Choo Kyung-ho, second from left, are shown during a meeting held to discuss the impact of the Fed’s 75-point base rate hike at the National Financial Market in central Seoul on Thursday. [YONHAP]

The FOMC raised the federal funds rate by 75 basis points for the second straight time on Wednesday, putting the rate in a range of 2.25-2.5%. Korea’s rate is 2.25%.

The Fed’s decision “was in line with market expectations” and its “impact on the domestic financial market should be limited,” Choo said during a meeting with Bank of Korea Governor Rhee Chang-yong in central Seoul on Thursday. The meeting was also attended by Financial Services Commission Chairman Kim Joo-hyun and Financial Supervisory Service Governor Lee Bok-hyun.

Choo said there are concerns about capital outflows from Korea due to the rate inversion between Korea and the United States, but added that foreign capital has flowed into Korea over the past three years. cases when the rates were reversed.

“The fundamentals of our economy, world events and appropriate responses are expected to play a more crucial role in driving capital inflows and outflows.”

Choo added that Korea will take preemptive measures to prevent volatility in the bond market, including government buyouts of the Treasury.