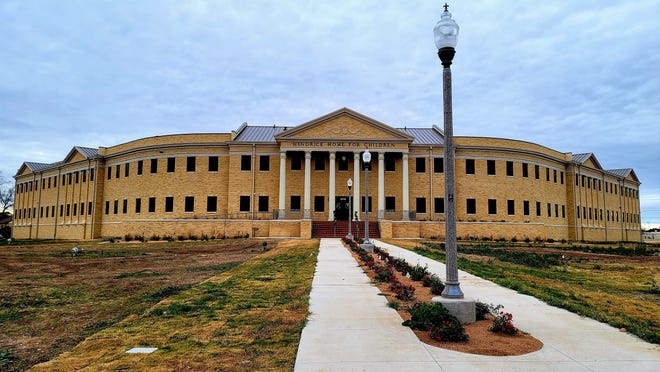 When the Hendrick Home for Children’s Vision 2020 strategic plan was born in 1998, it was clear that the architecturally distinct but aging main campus building had exceeded its target, said David Miller, president and CEO at retirement from home.

The building’s familiar columned facade, located just off Treadaway Boulevard, has dominated the minds and memories of many since 1939.

But the iconic exterior has started to harbor a lot of problems inside, Miller said.

“The walls were brittle,” he said. “We had black mold growing because we had a river under this building.”

The archaic wiring needed to be replaced, he said.

“There was no way to access all utilities and water, sewer pipes and the like, as they are sandwiched between two floors,” he said.

The worst part was that 95% of the building contained asbestos, he said.

“We knew we were going to have to deal with all of this,” Miller said.

Finally, the original building no longer had the floor plan needed “to provide the types of childcare functions that we do today,” he said.

Following:When Castle was king and ruled the architecture of West Texas

The house had seriously considered other options, paying a structural engineer $ 20,000 to look at alternatives, Miler said, including demolishing the wings of the main building while keeping the central section intact.

In the end, it was cheaper and made more sense from a design flexibility standpoint, to tear it down and start over.

“It was the best decision,” Miller said, although he had reservations.

“I was wondering how the community would take this,” he said. “Even my own wife wondered whether or not we should do this.”

But after speaking with the exes at Hendrick Home, it became clear that it wasn’t the building, it was the heart inside that mattered most, he said.

The plan didn’t just involve tearing down and rebuilding a structure, Miller said. A mountain of support facilities was needed.

This involved the construction of the Mike Ramsey Maintenance Building and Storage Complex and the 30,000 square foot AL “Dusty” and Nancy Rhodes Family Care Complex to house 12 single mothers and their children.

When the time came to start tearing down the main building, the entity had, in effect, “done something, (either) a renovation or a new one, on every square foot of the campus,” Miller said.

Something old, something new

In honor of Castle’s design, the project was to raze, then rebuild, an installation closely resembling the original.

Fortunately, there have been 22 years of good planning, Miller said, which means the house was able to raise money and pay for what it needed along the way.

“We have no debt, our construction program is 16 times bigger than it was in 1998,” Miller said. “And we’re in the best financial position we’ve ever been.”

However, not everything went as planned.

Work on the main building began two and a half years ago, he said, and Miller admits “we thought we would be where we are now in April of this year.”

Over the past two years, COVID-19, in particular, has set a “dramatic and emotional film on everything,” including challenges with the endowment of the house and the loss of some traditionally trusted fundraising income.

Miller was hopeful that supervisors could start moving in before the end of the year, and clients soon after, although he admitted the project was still in the “hang up the mirrors” phase in mid-December. .

According to “Hendrick Home for Children: Still Building on a Firm Foundation”, by Loretta Fulton, former editor and chief editor of Abilene Reporter-News, the new two-story structure allows for the expansion of 22 apartments for families and families. students.

Part of the process included the recovery and storage of furniture, props and historic or iconic documents, while the children from the old building were to be transferred to the Rhodes complex.

Staff moved to the home gymnasium, which served as temporary accommodation for offices, recreation and meals.

The gymnasium has also become a temporary classroom for campus children due to the COVID-19 pandemic.

A museum-like ‘Legacy Hall’ featuring artifacts from the original building will be on the second floor and will contain a timeline of the house from 1939.

Its content is curated by the familiar names Judy Godfrey, former director of the Grace Museum, and Bird Thomas, formerly of the Center for Contemporary Arts.

Administrative offices, suites for college students and single-parent families, a large banquet hall, a small dining room and a modern kitchen are located on the first floor.

There are additions including two elevators – something not included in the building’s original design.

The 60,000-square-foot main building is 10,000 square feet larger than its predecessor, but the modernization is expected to reduce utility costs by more than two-thirds.

Throughout the process, “we didn’t have all the employees we needed, which slowed us down even more,” he said.

And just like in his own home, there are big decisions about everything from decor to furnishings. Miller said.

“I thought it would be the jubilee year for the house, but it has been a more stressful year than I have ever had in my 27 years,” he said. “A lot of it goes back to COVID. “

That said, there is a lot to look forward to, he said.

The dining room, now large enough to seat 250 people, plus an overflow for another 80, is much larger than the house’s original capacity of 135.

This allows the house to accommodate 330 people at a time, which is great for Thanksgiving and Christmas holiday gatherings.

Improved AV equipment is another huge plus, he said, with three large screens and booming speakers in the dining room.

“When the kids watch a movie in there, it sounds like a theater,” he said.

The property’s kitchen is three times the size, with “all the latest and most modern kitchen equipment,” ”he said.

Most important will be “room to breathe” for everyone involved, he said.

The nature of the home’s programs means there is a “revolving door” of clients, some entering, some exiting because of success, he said.

“There will never be a day when we are 100% populated,” he said, whether in his family care programs or basic care.

But the additional space represents room for growth, although “the quality, not the quantity” of care is still the watchword moving forward, he said.

The new main building has the capacity to serve around 50 additional customers, with a capacity of 144 campus-wide, he said.

Looking back, Miller is rightly proud of a vision that began about 22 years ago and now rises like a phoenix from the rubble of the old.

The goal, he said, as he leaves Hendrick Home in the hands of new President Robert Marshall, is to prepare for the next 25, 50 or more years.

“We didn’t just think about the current need,” he said. “We were still looking down the road.”

Brian Bethel covers city and county government and general news for Abilene Reporter-News. If you value local news, you can support local journalists with a digital subscription to ReporterNews.com.