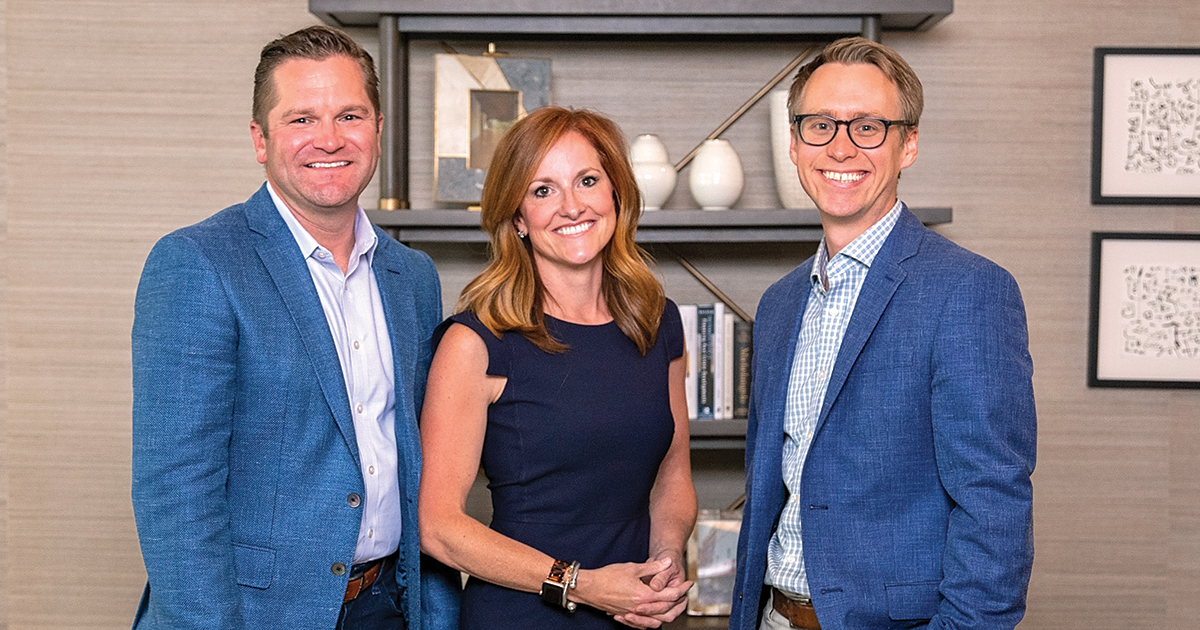 One For All: Greenwood Gearhart’s Evolution as a Multi-Family Office Reflects a Growing Region

Mary Ann Greenwood founded a pioneering woman-owned business in Fayetteville in 1982 when she started MA Greenwood & Associates, a Registered Investment Advisor (RIA). As a woman in a male-dominated industry, particularly in a rural market, Greenwood was ahead of her time.

In a recent interview, President and CEO Brock Gearhart said the company’s services present a more modernized view of what a financial advisor can be compared to the previous generation type of advisor.

â€œWe are not your grandfather’s advisers,â€ he joked.

Through a holistic, team-based approach, Greenwood Gearhart advises ultra-wealthy families in a variety of areas including investing, philanthropy, real estate and estate planning from locations in Fayetteville and a new office that opened earlier this year in Rogers’ Pinnacle Hills area.

â€œNorthwest Arkansas is more on the map as a region,â€ Gearhart said. â€œMore and more people are moving here and have seen services provided in other more sophisticated markets. The demand for what they need is therefore linked to the wealth they have accumulated, but what they have seen in other markets is increasingly sophisticated.

In many ways, the evolution of Greenwood Gearhart mirrors that of the region, which no one would call a rural market – it is growing.

Gearhart believes the company is well positioned to call itself what is referred to in the industry as a multifamily office, a model that handles most traditional family office functions in terms of a suite of services.

While there is no universally accepted definition, Gearhart said that a multifamily office could generally be described as an entity that takes care of the complex financial needs of a specific family and acts as a “senior advisor. “. In addition, they typically provide personalized services, technical expertise, creative business leadership, and day-to-day management of financial affairs.

He said Greenwood Gearhart hired the people to provide all the services inside the company without outsourcing. Many RIAs outsource services and try to coordinate them, making it difficult to deliver a cohesive value proposition to customers.

Gearhart said the company has also created a repository of online content and activities, including videos and presentations that counselors can use in their work with families.

â€œWe believe we are the only true multifamily office in the area,â€ said Gearhart. â€œOur culture of each client is a client of the firm and not an individual advisor, this is something that has existed since 1982 and is a great competitive advantage for us. Mary Ann structured the business this way. She deserves a lot of credit, and I think that’s why we’re at a pretty good starting point.

â€œThe platform we are building is based on what Mary Ann has put in place. It wouldn’t have happened if she hadn’t structured the business the way she did. So we owe him a lot of gratitude, and I do so personally. “

SUCCESSION SUCCESSION
Greenwood retired in 2015, the culmination of a multi-year succession plan to transfer ownership of the business to Gearhart. Originally from Fayetteville, Gearhart previously worked in the New York City financial services industry before returning home in 2008 to work for Greenwood, which he had known for years. He became a partner approximately a year later and President and CEO in 2013.

The company never officially announced a change of ownership and retirement from Greenwood. Gearhart said it was by design.

â€œWe call it ‘the country doctor’s approach’,â€ he said. â€œMary Ann has built tremendous trust over the decades with some of our clients, and we have not lost any clients during this transition. It was very deliberate.

â€œWe talked about it publicly with our customers, and they knew what was going on. But [we] chose not to speak openly about it outside. We felt it was the right thing for our customers. If they wanted to take inspiration from Mary Ann, they could always do so. It didn’t sound disturbing, and I think it was the most important for us.

Greenwood still lives in Fayetteville with her husband, University of Arkansas Dean Emeritus, Reed Greenwood. In a recent interview, she said Gearhart shares his corporate culture and investment philosophy, making him an ideal candidate as a potential successor.

“This [shared philosophy] made that possible, but Brock also had the same interests in building the business, â€she said. â€œYou have to have someone ready to seek out clients and talk to them. Running an investment management company is about more than investment analysis. It is a combination of client development and economic environment review, security analysis and portfolio management that matches the particular needs of each client. Brock had an affinity for it, which made him a truly perfect fit.

â€œThe more we talked, the more we knew this was what we wanted to do. So when Brock decided to come back from New York, it was Kismet who brought us together, I think. It was like spirits with a purpose, and they coincided. Our clients have always been clients of the firm and not individual clients. It gives the customer the best possible service, I think. And I think Brock is okay with that.

EXPERIENCE IN BIG CITIES
As an effective leader would, Gearhart gives employees credit for fostering the culture of the company.

â€œWe have an exceptional team,â€ he said.

Greenwood Gearhart has 13 employees, a constant number even though the company’s financial size has almost quadrupled since 2008.

Lisa Brown, COO, and Johann Komander, Managing Director of Investment Management, are two essential members of the leadership team. Like Gearhart, these are examples of native Arkansans who previously worked in larger markets before returning to the state to work at Greenwood Gearhart.

A native of Greenwood, Komander attended college at the Massachusetts Institute of Technology and moved to Fayetteville in 2018. Prior to that, he spent nearly a decade working on Wall Street for Morgan Stanley and Goldman Sachs.

“I would put my experience [at Greenwood Gearhart] same level of the people and the culture I worked with in New York, â€he said,â€œ with the added benefit of being in a more community-driven market. In my opinion, we have created the caliber of experience that people who move here from other markets or certain types of wealthy people in the region are going to expect over time. I am very proud of it and this is one of the main reasons why I decided to join this firm.

â€œWe have the expertise with our team, but we also have the depth of relationship with our clients that surpasses anything I’ve known,â€ said Brown. â€œIt’s a real luxury.

Greenwood is one of the most connected business leaders in the state, and economic development has been a major concern for her for years. She is a past chairperson of the Arkansas Economic Development Commission and has three AU degrees, including a doctorate. in economics and finance. In addition, she remains involved in various cultural activities in Northwest Arkansas including Symphony of Northwest Arkansas, Walton Arts Center and TheatreSquared.

She said retaining the best and brightest in the state – reversing the “brain drain” – is essential for Arkansas’ long-term health. Northwest Arkansas’ investments in quality of life amenities play an important role in this effort.

â€œWe have a place to live that is very desirable, and it is part of the history of [Greenwood Gearhartâ€™s] success, â€she said. â€œNot only is this a great place to live, but you can also get professional services as good or better than you can get elsewhere. “

â€œGreenwood Gearhart has broadly expanded its wealth management services using a myriad of subject matter experts in areas ranging from investment management to estate planning,â€ said Gearhart. “Katie Eaves is an incredibly talented lawyer and we are very fortunate to have recruited her to improve the services we can provide to our clients.”

Originally from Fayetteville, Eaves recently worked in the Rogers office of Friday, Eldredge & Clark. She joined the firm in 2017 as a partner in the estate and trust planning practice group and was elected a partner earlier this year. She has focused her practice on estate planning, administration of trusts and estates, probate matters, taxation and formation of estates and gifts, and planning for exempt organizations.

â€œI had the privilege of working alongside many people at Greenwood Gearhart while I was in private practice,â€ said Eaves. â€œI am delighted with this new opportunity to join their team and provide additional services that complement their comprehensive wealth management services. “

Gearhart said that one of Eaves’ first responsibilities within the company was to explore the creation of a trust company.

The need for the ultra-rich to move on to the next generation. Don’t ignore…