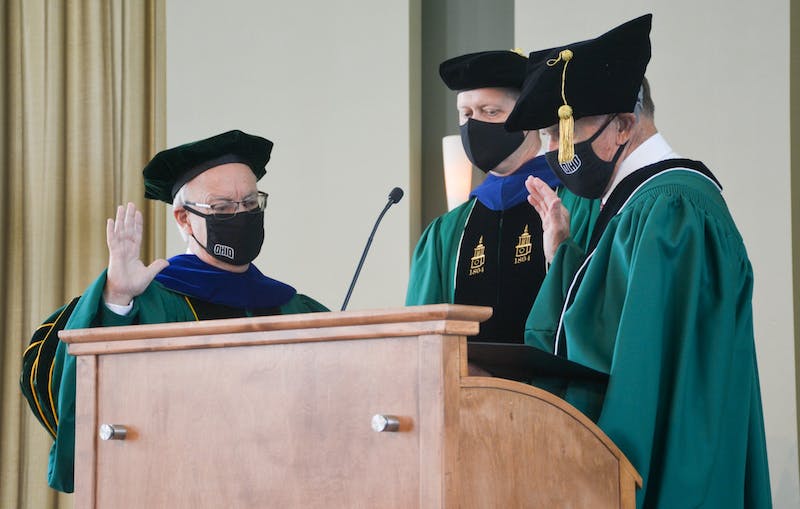 OU president delivers state of university speech at board meeting

The Ohio University board met in committees on Friday to discuss, among other things, the FY22 budget and to hear from OU president Hugh Sherman before the semester begins.

The Resources, Facilities and Affordability Committee met on Friday morning to discuss the findings for FY21 and the forecast for FY22 and beyond.

Senior Vice President of Finance and Administration Deb Shaffer described the impacts of the pandemic on the university’s income, estimated at around $ 84 million. The additional expenses associated with the pandemic, which include categories related to testing and public health initiatives and cleaning and installation protocols, are estimated to have had an impact of just under $ 43 million.

Funding from external agencies, primarily federal CARES and state funding, is estimated at approximately $ 80 million. That leaves the final impact of the pandemic at around $ 47 million.

Among other factors, the university’s operating model in FY21 will offset the impact of the pandemic, Schaffer said.

“While we have this projected expense directly tied to the changes we made to the pandemic, because we were in the business model that we were, we talked about the fact that we had … significant savings compared to what we had budgeted and compared to previous years, linked to institutional spending, ”Schaffer said.

Given these saved expenses, the university should expect a surplus of $ 38 million from its operations. However, as the university begins the year-end closing process, these numbers may undergo some tweaking.

Over the next few years, OU tuition fees are expected to grow by 2%. Financial aid, Shaffer said, will likely increase as tuition fees increase. Multiple assumptions for future years have varying levels of probability and impact. Assumptions that have a high probability of changing and have a large impact include net tuition fees, wages and salaries, and healthcare inflation.

A resolution to approve the FY22 budget was sent to the full Council, with a recommendation for approval, where it was adopted unanimously.

Other areas of interest covered by the six-year CIP are projects related to airport operations, transport and parking.

The Board of Directors approved two more resolutions, the first detailing the $ 10.6 million of the century bond financing for PIC FY22, and the second detailing additional capital projects such as the rehabilitation of the gate tunnel. class, steam repairs, energy efficiency upgrades and replacement of Peden’s boiler and domestic hot water tank. .

The governance and compensation committee met on Friday to discuss adding another trustee to the board.

“We suggest that the individual be someone who has shown leadership and is involved in the activities of the local community,” Sherman said. “Some of the people that could be considered could be someone who represents nonprofit organizations, or a healthcare organization could be a few examples.”

In order to select this new trustee, there will be a list of qualifications that applicants must meet. Additionally, Sherman said he plans to possibly ask a group of mayors from cities where OU campuses are located to solicit a list of potential candidates and plans to make a formal proposal at the October meeting. from the administration board.

The committee then agreed to present two resolutions in October regarding the position. The first will be to change the regulations governing the appointment of the position and the second will be to add a new member of the board of directors.

Following this agreement, the entire Council voted in favor of electing the Council Treasurer and the meeting was adjourned.

State of the University Address

Sherman said he wanted to prioritize student skills, technological advancements and financial health during his tenure at the OU.

Chairman of the Board, Cary Cooper, took the presidential oath alongside Board Secretary David Moore. After Sherman was sworn in, he spoke of his enthusiasm for the semester.

“When I came back to campus from the east end of town, it was so exciting to see all the students and everyone moving in,” he said. “And I saw the perfect scene you always see, right here near South Green, where a mother hugged her child and wouldn’t let her go.”

All the students were guest back on campus this coming school year, which has not been the case since the fall 2019 semester. Former OU president Duane Nellis resigned on May 13, two years before the official end of his contract, according to a precedent To post report. Table selected Sherman on May 27.

“The problem is really simple, and I think we all understand it,” Sherman said. “The income is stable… and it should be stable… if you take all the universities in the country. “

Sherman said he wanted to recruit and retain faculty and staff by offering competitive salaries, wages and benefits.

Additionally, Sherman said he wanted students to be equipped with skills such as communication, data and technology literacy, critical thinking and systems thinking to adapt to developments in artificial intelligence and to its role in the workforce.

Letter: The end goal is technology that fights all pathogens