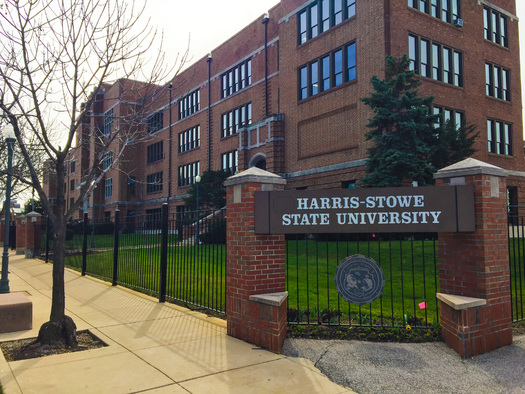 A student survey in historically black colleges and universities (HBCUs) nationwide, nearly half have been food insecure in the past 30 days.

More than half have experienced housing insecurity during the pandemic, with many students saying they choose between paying rent or buying food. The report noted that the disproportionate impact of COVID-19 on HBCU students has exacerbated existing racial inequalities.

Terrell Strayhorn, provost and senior vice president of academic affairs at Virginia Union University and director of the Center for the Study of Historically Black Colleges and Universities, co-author of the report, said investing in student needs is essential to increase student success.

“It’s hard to feel like you belong in higher education when your basic needs aren’t being met,” Strayhorn explained. “When you don’t have enough money to pay your bills and have food and have a place to lay your head, but you’re expected to show up to biology class.”

The report notes that HBCUs account for more than 20% of black American bachelor’s degrees and serve many Pell Scholarship-eligible students, meaning they are eligible for the federal need-based scholarship program.

Public HBCUs depend on federal, state, and local funding for more than half of their incomecompared to 38% for their predominantly white counterparts.

Andre Smith, a political scientist at Fayetteville State University, formerly of Harris-Stowe State University, said Missouri’s university funding model is performance-based, and that both HBCUs as well as Missouri Western, an institution in predominantly white in St. Joseph, are found on the low end.

“They have the most needy students who will need the most institutional support,” Smith pointed out. “But because of Missouri’s funding model, these three schools receive the least funding.”

The report is a joint effort of the Hope Center for College, Community and Justice and the Virginia Union’s Center for the Study of Historically Black Colleges and Universities. It makes state and federal policy recommendations for lawmakers, including expanding financial aid and emergency aid options for HBCU students.

Additional help is in the works to make it easier for adults in rural Northern California to return to college to earn a certificate or degree.

ProjectAttain! in the Sacramento area is one of five educational nonprofits across the country sharing a $750,000 grant from CivicLab.

Barbara Halsey, network director of ProjectAttain!, said the grant will help the group expand its navigation program, which helps adults overcome barriers that make it difficult to return to school.

“Hopefully in five years,” Halsey said, “The California Workforce Education Development System is so efficient that the problem of people stopping no longer exists.”

ProjectAttain! will receive financial support and technical assistance for the next two years under the grant.

Halsey said adults returning to school in rural areas often face greater challenges because the nearest college can be hours away, broadband can be spotty — and, compared to In urban areas, affordable child care is particularly difficult to find.

“So that way,” Pawlicki said, “someone who maybe has to move for work, have their credit matter to other places, and have these organizations collectively share that they’ve learned to improve the ‘Entire Higher Education in Northern California.’

Support for this report was provided by Lumina Foundation.

Teachers returning to class in New Mexico this fall will see the first significant salary increase in several years.

Starting July 1, all public school teachers, regardless of grade, will receive a raise of at least $10,000.

Whitney Holland, president of the American Federation of New Mexico Teachers, was elected after teaching for nearly a decade. She has advocated for what she calls a “living wage” because she remembers how hard it was to make ends meet when she started teaching in 2012.

The annual salary for tier “two” teachers will now be $60,000 per year, while “tier three” teachers will see their salaries climb to $70,000. According to the governor’s office, the increases make New Mexico the highest paid education system in the region, higher than Arizona, Colorado and Utah.

In addition to salary increases, Holland pointed out that recently passed legislation would lay the foundation for rebuilding the educational profession in New Mexico, investing in the educator workforce to retain veteran educators and attract new ones. new educators in the state.

“We wholeheartedly believe that having fully staffed schools is exactly what our students deserve,” Holland said. “All of this legislation is a step towards that and rebuilding those schools and their staffing.”

According to Holland, the pandemic has not only decimated teaching positions in schools, but also created nearly 2,000 vacancies for positions such as bus drivers, caretakers, secretaries and others who help run schools. New Mexico was the only state to bring in members of the National Guard, Army and Air Force troops to fill in for teaching due to pandemic-related absences.

Disclosure: The American Federation of Teachers contributes to our fund for reports on education, health issues, living wages/working families, and social justice. If you would like to help support news in the public interest, click here.

Bills have surfaced in nearly 30 states to crack down on the public school curriculum, with systemic racism as a focal point. Some bans have been passed, and South Dakota has its own version in the works, though educators are voicing concerns.

Today, a Senate committee will hear from a GOP-led bill prevent teachers from promoting politically divisive concepts. An example is that individuals are inherently responsible for past actions committed by other members of the same race.

Loren Paul, president of the South Dakota Education Association, called the measure troubling in part because the provisions are subjective and lack clarity.

“I believe this will have a chilling effect on what our educators are actually teaching in their classroom and take away some of the confidence an educator may have to teach certain things,” Paul asserted.

He argued that the state Code of ethics already provides a process for dealing with such issues, and the new bill would only add to the confusion. The association was also concerned that it would impair a student’s ability to assimilate certain subjects. Proponents of the bill say they want to protect students from political indoctrination.

The bill, which was recently approved by the House, does not mention Critical Race Theory (CRT), the concept of higher education at the center of recent debates.

Rep. Sue Peterson, R-Sioux Falls, acknowledged that CRT is not taught in public schools and argued that the bill would not prevent tough lessons about racism.

“This bill is about balance,” Peterson said. “This is to prevent the promotion of racist and political ideas to a captive audience of young students in our public schools.”

Paul countered that the captive audience doesn’t need the legislature to interfere via the bill.

“It will deprive students of the opportunity to learn and ask questions and not just accept everything they hear as fact,” Paul pointed out.

He was also concerned that this would add to the list of difficulties encountered in trying to recruit and retain teachers.

The proposal saw amendments to gain more support from lawmakers. A similar bill has also emerged in the House as Governor Kristi Noem calls for the bans to be sent to her office.

Disclosure: The South Dakota Education Association contributes to our education reporting fund. If you would like to help support news in the public interest, click here.