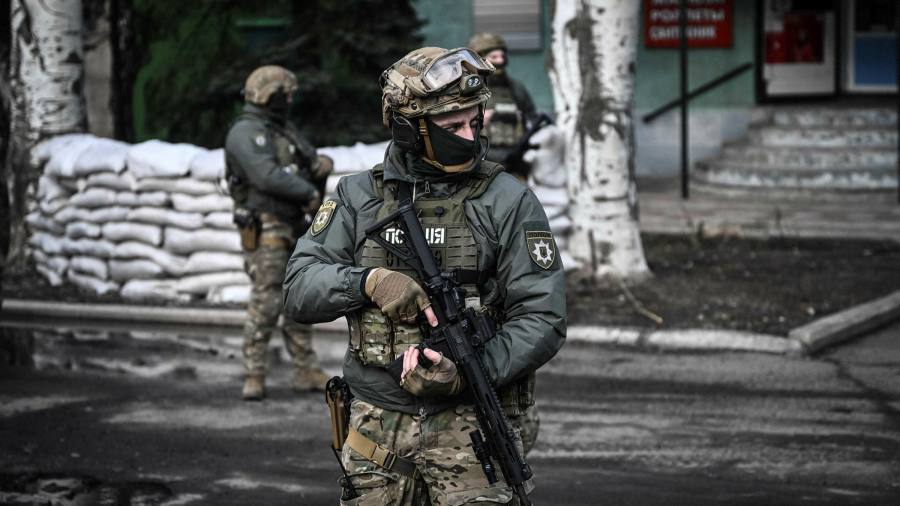 Russia is using deception as a pretext for invading Ukraine, Western leaders warn

Western leaders have said Russia is following a “manual of deception” to justify an invasion of Ukraine, amid escalating clashes in the east of the country between Ukrainian forces and pro-Russian separatists.

Speaking at the Munich security conference, US Vice President Kamala Harris said Moscow was creating false pretenses for an attack while gathering troops and firepower in plain sight.

Ukrainian President Volodymyr Zelensky said Ukraine had been the victim of an “information war, a hybrid war” but was “not responding to any provocation”.

“We know they are firing from civilian areas, to provoke us, to make us react,” he said. “We have to keep our calm.”

The massive reinforcement of Russian troops on the Ukrainian border raises fears of a new war in the heart of Europe.

Western leaders speaking at the conference called for a diplomatic solution, urging Russia to “retreat from the abyss”. But they also warned Moscow of the consequences of an invasion: far-reaching sanctions that they said would inflict enormous damage on its economy.

Zelensky used his appearance in Munich to call on the West to stand with Ukraine, and said Western nations had let Kiev down by appeasing Russia.

“Some countries commit crimes while others are indifferent, and this indifference has turned them into accomplices,” he said.

Zelensky referred to a speech that Vladimir Putin gave at the Munich conference in 2007 when he “issued a challenge to the global security system”.

“How did the world react? Appeasement,” he said. “What do we get as a result? The annexation of Crimea and the aggression against my country.

Speaking to CNN on the sidelines of the Munich conference on Saturday, Zelensky suggested Kiev had a “different view” than the West on when to apply sanctions. While the United States and its allies want to impose them after an attack as a punitive measure, Zelensky said they should be imposed immediately, especially since an attack seemed close.

In a statement released on Saturday, the G7 foreign ministers said: “While we stand ready to explore diplomatic solutions to address legitimate security concerns, Russia should be in no doubt that any further military aggression against Ukraine will have massive consequences, including financial and economic sanctions.” on a wide range of sectoral and individual targets that would impose severe and unprecedented costs on the Russian economy. We will take coordinated restrictive measures in the event of such an event.

Ukrainian Joint Forces Commander Oleksander Pavlyuk said the situation around Donetsk and Luhansk had deteriorated over the past three days.

Ukraine says two soldiers were killed and four injured in shelling in the eastern border region of Donbas, where more than 14,000 people have died in a slow-running war that erupted after Russia annexed Crimea in 2014.

Russia-backed Donbass separatist leaders have accused Kiev of carrying out “terrorist attacks” which they say, without providing evidence, left an unknown number of people dead and injured.

Russia said Ukrainian artillery fire landed on the Russian side of the border. Zelensky called the reports “lies.”

Separatist leaders announced a mass evacuation of civilians to Russia – where Putin promised them a payment of Rbs 100,000 – and called on all men of fighting age to mobilise.

The time codes of the separatists’ video calls were dated Wednesday – before the escalation in bombardment began – adding to suspicions of a false flag operation as a pretext to invade.

British Prime Minister Boris Johnson said the world must prepare for the “Russian book of deception”, adding that Moscow was “weaving a web of lies aimed at presenting any Russian attack as a response to provocation”.

Germany and France have urged their citizens to leave Ukraine. They had previously refrained from calls for evacuations launched by countries such as the United States and the United Kingdom.

Lufthansa, which owns airlines such as Lufthansa, Austrian and Swiss, said it would halt scheduled flights to Kyiv and Odessa until the end of February. KLM and Norwegian also canceled flights to Ukraine.

Harris warned that the West would impose “far-reaching financial sanctions and export controls” on Moscow if Putin gave the order to attack Ukraine.

“Make no mistake, the imposition of these drastic and coordinated measures will inflict great damage on those who must be held accountable,” she said.

Johnson said that in the event of an invasion, the West would “sanction Russian individuals and companies of strategic importance to the Russian state.”

“We will make it impossible for them to raise funds in the London capital markets,” he told the conference. “We will open the matryoshka dolls of Russian-owned businesses and entities to find the ultimate beneficiaries inside.”

Other leaders have called on Russia to step back from the abyss.

Olaf Scholz, the German chancellor, said Russia’s attempt to turn Kiev’s possible NATO membership into a “casus belli” was a “paradox” because the issue was not on the agenda of the Western day.

Additional reporting by Philip Georgiadis and Jasmine Cameron-Chileshe in London, and James Politi in Washington.