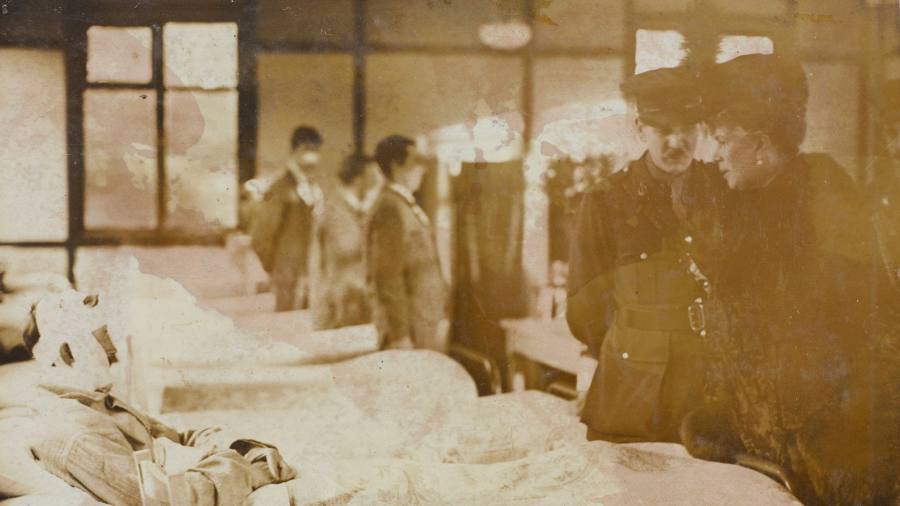 ‘The patient’s new face emerging from his chest’ headlined the Yorkshire Evening Post on December 6, 1917. A few days earlier, Harold Begbie of the Post stood in an operating theater at Queen’s Hospital, Sidcup. The anesthetized man on the table in front of him was naked from the waist down, and his orange, iodine-soaked chest showed the faint outline of a hand-drawn face. What made the sight all the more disturbing was that the man’s true facial features were “blasted and shattered” beyond recognition.

Begbie watched in horror and fascination as the surgeon took up his scalpel and began to carefully slice and lift the skin along the outlined lines. Another member of the medical team drew the viewer’s attention to two distinct ridges protruding from the patient’s shoulders. They were pieces of bone – already taken from his ribs, implanted just under the skin to preserve them – that would be used as cartilage for his new nose.

It was too much for Begbie who had to be escorted out almost immediately. But he had seen enough to know that the surgeon in that operating room was making history. “A revolution has come,” he informed his readers. “A new face is grafted onto it, grows into it and becomes a real face.”

Gillies is that rare hero; very accomplished, but also modest and empathetic

The man wielding the scalpel was Harold Gillies, a New Zealand-born, Cambridge-trained otolaryngologist. His pioneering work during World War I not only restored the identity and dignity of thousands of horribly wounded soldiers, but, as medical historian Lindsey Fitzharris shows, also established plastic surgery as we know it. know today.

We are aware that mechanized mass combat has led to industrial-scale slaughter, and we are also well aware of the psychological trauma caused by the sights and sounds of trench warfare. The truly gruesome facial injuries suffered by so many soldiers between 1914 and 1918 are less widely documented. Basic medical advances meant that more men survived these injuries than ever before, but when it came to trying to repair the damage, surgery was still horribly limited. These men – the French called them broken jaws (faces shattered), the Germans Menschen ohne Gesicht (men without faces), and the English, the “Loneliest of Tommies” – were left in limbo; hidden out of sight and deprived of the welcome of the hero celebrated by their brothers in arms.

As a young ear, nose and throat specialist serving in a Belgian military field hospital, Gillies saw these horrors firsthand. Back in England, he established a specialist maxillofacial unit, where, as the war raged on and the wounded continued to be sent home, he assembled a team of specialists to develop what he described as “this strange new art”. These included dental surgeons, anesthesiologists and radiologists, as well as artists, sculptors and photographers. Fitzharris captivatingly shows that the process of making the face required both surgical innovation and artistic skill.

Gillies is that rare hero; very accomplished, but also modest and empathetic. It’s quite moving to read how he would reassure those in his charge. “Don’t worry, son,” he said. “You’ll be fine and look as good a face as most of us do before we’re done with you.”

As in his award-winning book in 2017 The art of butchery – on how Joseph Lister transformed Victorian medicine with an antiseptic – Fitzharris does not sensationalize the gory details of the battlefield or the operating room. But she doesn’t look away either. Sometimes scary, sometimes moving, The Facemaker seized me; it is elegantly written and endlessly fascinating. Using the right balance of diligent research and ingenious resuscitation, Fitzharris brings an overlooked slice of medical history to life, telling the story of Gillies as well as that of many of the men whose faces and lives he saved.

Highlighting our efforts to avert humanitarian catastrophe and economic collapse in…

The self-selling private equity bandwagon is a wild ride