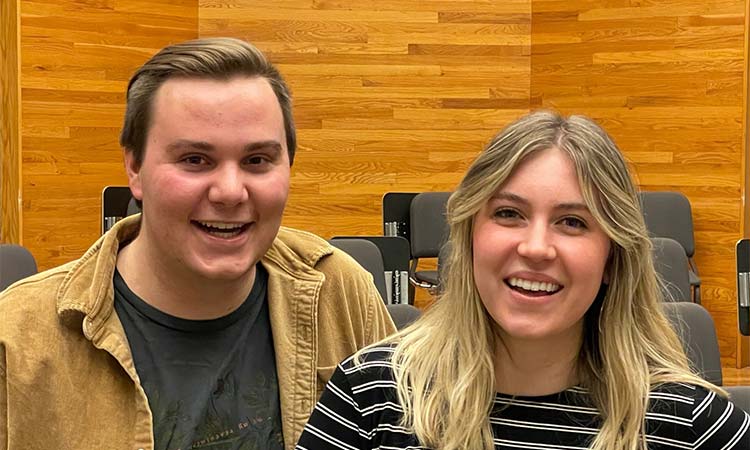 It is fitting, then, that Collège Saint-Benoît senior is one of the first two recipients of the scholarship established by the long-time conductor and professor in the music department of CSB and Saint John’s University who took his retirement at the end of the 2020-21 school year. .

The other recipient is second SJU student Ben Ascheman.

“He’s truly the greatest mentor I’ve had in Saint Ben’s and Saint John’s,” said Wedin, a Chanhassen, MN native who currently teaches in the Bloomington, MN school district and hopes to find a full-time job. music teaching position in the Twin Cities at the elementary or intermediate level by the start of the school year next fall.

“Not only was I in the choir with him for the first three years, but he was the teacher who taught my conducting classes. I also worked in the music department, so I got to know it quite well during my time here. He helped me become not only the musician I am today, but also the educator I am now and hope to be in the future.

the Axel Theimer Scholarship Fund for Choral and Vocal Music Education was created for the benefit of students majoring in teaching choral and vocal music at CSB and SJU. The award is merit-based, available to sophomore through senior year students, and renewable annually as long as the recipient continues to complete the department’s major choral/vocal music education sequence.

The endowments were established by Theimer in 2013 (SJU) and 2017 (CSB) respectively.

“My primary goal was and continues to be to educate future choir/voice teachers about the value of music and music education at CSB/SJU,” Theimer said. “That we have a very successful and engaging program, and many high performing graduates in the field. Also, offer financial support to ease ever-increasing financial burden and financial challenges.

“What would the world be without music? Whatever we do to make education more affordable for all future musicians, I think that’s a worthy goal. I hope the endowment flourishes and that we can support students in a way that inspires them to look a little closer at our schools because they know that music and music education is valued here.

Ascheman, a graduate of Hastings, Minnesota High School, got to know Theimer as a freshman and continued to get to know him this year as Theimer continued to stay present in the music department.

“I’m really grateful for the opportunities I’ve had to work with Axel,” said Ascheman, whose goal is to become a high school choir teacher. “He really understands people and their voices. He’s been doing it for so long that it comes naturally to him.

Both Ascheman and Wedin said they are grateful to Theimer and other donors who made this scholarship possible.

“It means a lot to me,” Ascheman said. “It’s so helpful. I’m really grateful.

“It’s a huge honor,” added Wedin. “I just think of all the lives he touched in the 50+ years he spent at CSB and SJU. It’s such a wide network of people he’s influenced, so it’s truly humbling to be named one of the first recipients of a scholarship that will carry on his legacy.