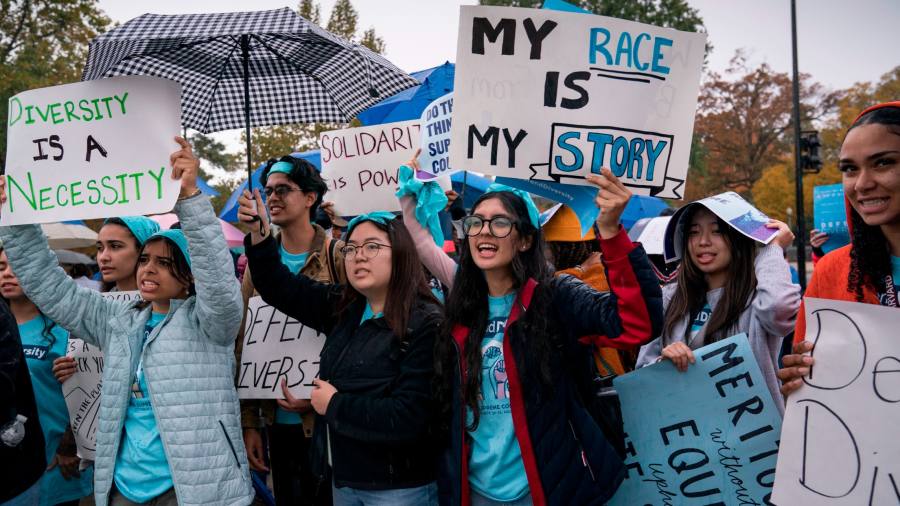 The conservative majority of the U.S. Supreme Court on Monday expressed skepticism about the power of universities to consider race as a factor in college admissions while hearing arguments in two affirmative action cases that could have significant implications for American society and business.

The court’s decision could significantly affect the way America’s universities, among the world’s most sought after, handle admissions and lead to sweeping changes in a system that for decades has taken race into account in an effort to build diverse student bodies.

Clarence Thomas also questioned the educational benefits of diversity. When the UNC attorney said diversity could lead to greater productivity, Thomas said, “I guess I don’t give it much thought, because I’ve also heard similar arguments in favor of segregation.

Samuel Alito seemed sympathetic to the argument that giving a minority student “a plus” would disadvantage another in the “zero-sum game” of college admissions.

The three liberal justices strongly defended the practice, saying applicants could choose whether or not to disclose their race and that it was one of many factors considered in admissions.

Ketanji Brown Jackson said she is concerned that the petitioner’s arguments imply that students need to “mask their identities” in the application process “solely on the basis of their difference”.

While “everyone would rather achieve all of our racial diversity goals through racially neutral means,” noted Elena Kagan, the question was whether schools could “become racially aware” when needed.

Sonia Sotomayor warned that the race ban has in some cases led to lower enrollments of minority students, particularly blacks and Native Americans. “There’s a high price to pay in banning underage use of race in college admissions, isn’t there?” she says.

Kagan also criticized the argument that it doesn’t matter that institutions “look like America”.

“These are the pipelines to leadership in our society,” she said. “I thought that was part of what it meant. . . to believe in American pluralism is that in reality our institutions reflect who we are as a people in all its diversity.

Elizabeth Prelogar, Solicitor General of the United States, argued for universities, saying the government had an interest in preserving diverse student bodies that would continue to shape the nation’s military and federal agencies.

Students for Fair Admissions, a nonprofit seeking to abolish racial considerations in admissions, brought both cases. He argues that race-based affirmation action has benefited African American and Hispanic students at the expense of Asian Americans and others.

The group is asking the court to overturn Grutter vs. Bollinger, a landmark 2003 Supreme Court decision that allowed universities to consider race in admissions by reaffirming that diversity is a government interest.

The two universities named in the cases urged the court to consider the “educational benefits” of diversity.

Olatunde Johnson, a professor at Columbia Law School, had said there was “certainly a risk” that a ruling against universities could stifle the diversity of student bodies and make colleges “vulnerable through fear”. . .[of] prosecutions”.

The court’s 6-3 conservative majority has already challenged long-standing legal precedents on issues such as abortion, suggesting they could also be open to Grutter’s overturning. A lawyer involved in the case told the Financial Times that “everyone is assuming” that the court will limit affirmative action in universities.

But Johnson said that would depend on the extent of the court’s decision, which may be difficult to predict given that several judges have never expressed a public opinion on affirmative action.

American companies are watching these cases closely, fearing that a decision against the universities could limit the diversity of their future recruits. Dozens of major companies, including American Airlines, General Electric, Meta, Google and Apple, have filed a Short in support of colleges.

Kagan on Monday stressed the need for companies “to have a racially diverse workforce. . . to achieve their economic goals.

If the affirmative action precedents are overturned, “it may well be that many of these large corporations will then be the next defendants in these types of lawsuits,” said Eric Talley, a professor at Columbia Law School.