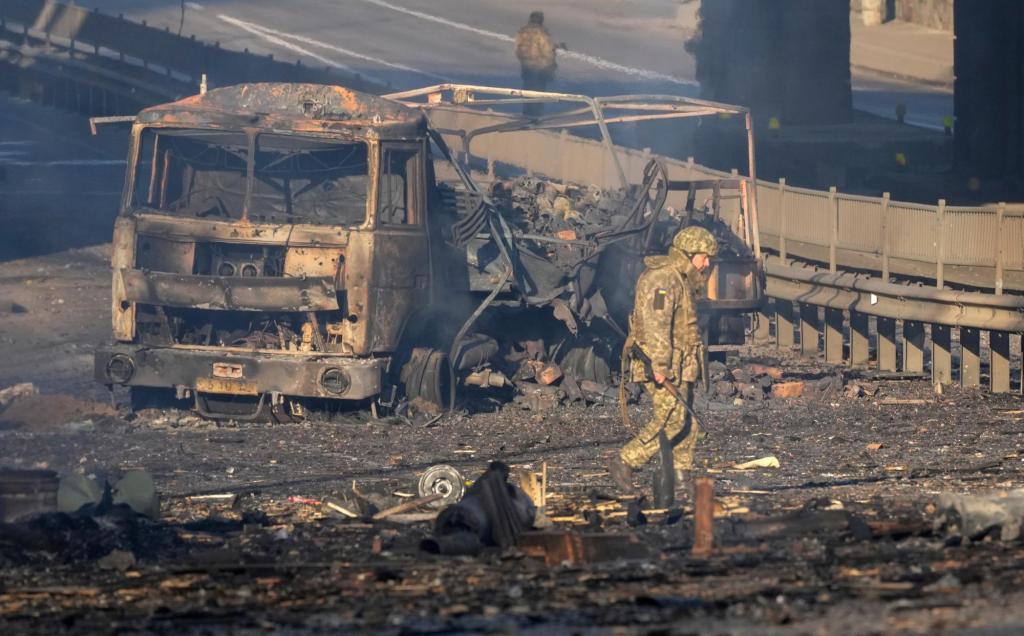 US, EU and UK agree to remove some Russian banks from SWIFT – Boston Herald

WASHINGTON (AP) — The United States, the European Union and the United Kingdom agreed on Saturday to block “certain” Russian banks from the global financial messaging system SWIFT and impose “restrictive measures” on its central bank in retaliation for his invasion of Ukraine.

The measures were jointly announced as part of a new round of financial sanctions intended to “hold Russia to account and collectively ensure that this war is a strategic failure for (Russian President Vladimir) Putin”. The central bank’s sanctions restrictions target $600 billion in reserves the Kremlin has.

Saturday’s decision includes removing major Russian banks from the SWIFT financial system, which moves countless billions of dollars daily through more than 11,000 banks and other financial institutions around the world.

Allies on both sides of the Atlantic also considered the SWIFT option in 2014, when Russia invaded and annexed Ukrainian Crimea and backed separatist forces in eastern Ukraine. Russia then declared that kicking him out of SWIFT would amount to a declaration of war. The allies – since criticized for responding too weakly to Russia’s 2014 aggression – dropped the idea. Since then, Russia has tried to develop its own financial transfer system, with limited success.

The United States has already succeeded in persuading the Belgian-based SWIFT system to expel a country – Iran, because of its nuclear program. But kicking Russia out of SWIFT would also hurt other economies, including those of the United States and key ally Germany.

The disconnection of SWIFT announced by the West on Saturday is partial, leaving Europe and the United States the option of further tightening sanctions later.

Announcing the measures in Brussels, European Commission President Ursula von der Leyen said she would also push the bloc to “cripple the assets of the Central Bank of Russia” so that its transactions are frozen. Cutting several commercial banks from SWIFT “will ensure that these banks are disconnected from the international financial system and will harm their ability to operate globally”, she added.

“Closing the banks will prevent them from carrying out most of their financial transactions around the world and will effectively block Russian exports and imports,” she added.

Getting the EU on board to sanction Russia via SWIFT was a difficult process as EU trade with Russia amounted to 80 billion euros, around 10 times more than the US, which had been one of the first proponents of such measures.

Germany had specifically balked at the measure because it could hit them hard. But Foreign Minister Annalena Baerbock said in a statement that “after Russia’s brazen attack…we are working hard to limit the collateral damage of (Russia’s) decoupling of SWIFT so that it reaches the right people. What we need are targeted functional restrictions from SWIFT. »

As a further step, the allies announced a commitment “to take steps to limit the sale of citizenship – the so-called golden passports – which allow wealthy Russians linked to the Russian government to become citizens of our countries and to have access to our financial systems.

The group also announced the formation this week of a transatlantic task force to ensure these and other sanctions against Russia are implemented effectively through information sharing and asset freezing.

Rachel Ziemba, associate principal researcher at the Center for a New American Security, said that despite a complete ban on SWIFT, “these measures will still be painful for the Russian economy. They reinforce the measures already taken at the start of the week by making transactions more complicated and difficult. »

Ziemba says the pain the sanctions will cause to the Russian economy will depend on which banks have been restricted and what steps are taken to restrict the central bank’s ability to operate.

“Anyway, this kind of increasing sanctions, removing banks from SWIFT, restricting the Central Bank, all of this will make it more difficult to get raw materials from Russia and will increase the pressure on the market. financial.”

By eliminating the diaper tax, we can help parents pay for the essentials