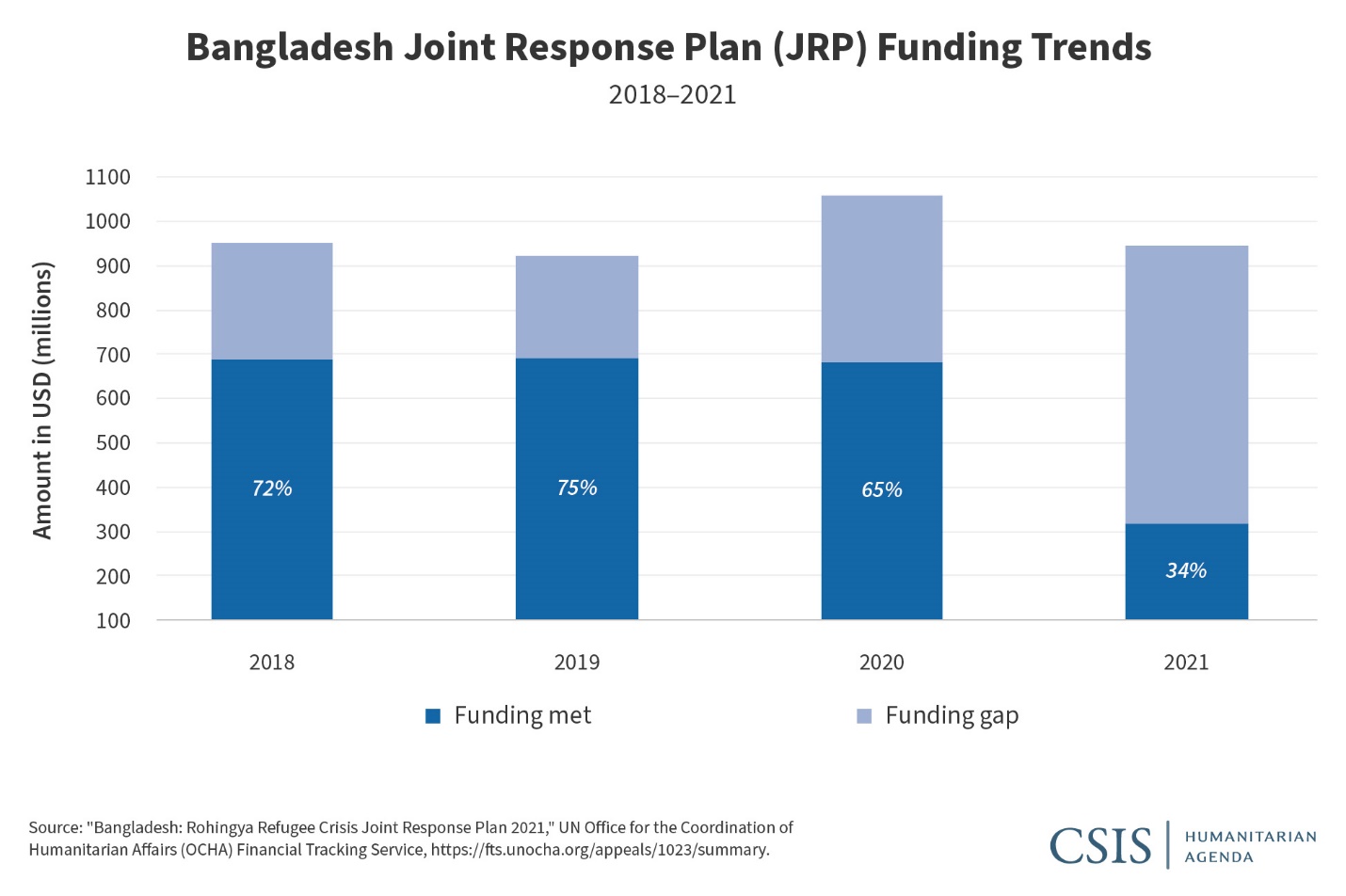 Since July 2021, only $ 366 million of the total required, around $ 1 billion, the humanitarian aid fund for the Rohingya has been disbursed. Disbursement fell to 34%, which was in a range of 72-75% of total funds required in the first three years of the Rohingya influx since 2017. This downward trend in foreign donations is raising the next question: has the world forgotten the fate of the Rohingya? “

The year 2021 marks the fourth anniversary of the military-backed inhuman “Customs clearance operation” followed by a massive exodus of hundreds of thousands of Rohingya in what the UNHRC called “Classic example of ethnic cleansing”. While the rest of the world turned a blind eye to the Rohingya, Bangladesh generously offered them temporary shelter. These stateless people have equal rights to lead a life of dignity and build a stable future in Rakhine like everyone else, which can only be guaranteed if the global communities express their solidarity with them. A stable funding commitment from long-standing donors is a prerequisite for food security, clean water, health care and non-food items for 1.1 million Rohingyas. The ultimate durable solution, safe and durable repatriation, seems a distant reality now, even after the signing of two repatriation agreements, due to Myanmar’s reluctance to create the right conditions. Until repatriation becomes possible, the world must stand with one of the world’s largest refugee receiving countries, Bangladesh, to uphold the dignity of “the world’s most persecuted minority. our time “.

While one crisis competes with another, the newly emerged crisis usually dissipates the global focus on funds and focuses on existing funds, thus worsening the former. The reluctance of donors to open up scholarships as much as the crisis demands can further intensify the crisis. Foreign aid to the Rohingya began to decline after the economic fallout triggered by covid-19 began. In addition, the Taliban takeover of Afghanistan created a new humanitarian crisis by displacing millions of Afghans. This crisis has resulted in a significant reduction in foreign donations to the Rohingya by diverting attention from the ongoing Afghan crisis.

In addition to suffering social decadence and environmental degradation, Bangladesh also bears a substantial economic burden to support the persecuted Rohingya. The Center for Policy Dialogue (CPD), a Bangladeshi think tank, has signaled that Bangladesh must spend approximately $ 1.22 billion every year on Rohingya refugees, who will increase with population growth, rising inflation and declining foreign aid trends. CPD also considered that once the repatriation started, it take 12 years if 300 Rohingyas are repatriated every day, assuming current population growth remains constant. According to the CPD, approximately $ 7 billion would be required to house and support Rohingya refugees for the first five years without repatriation. It is practically impossible for a country like Bangladesh to afford this colossal expenditure because it depends heavily on external debt to fill its budget deficit.

The Rohingya crisis is the result of a long-simmering conflict that can be a catalyst for new sources of conflict. A huge funding shortage can lead to the emergence of new challenges, for example extortion, prostitution, human trafficking, drug trafficking, radicalization as well as intra and intergroup conflicts such as assassination of Rohingya leader Mohibullah. In addition, the financial shortage will have a devastating impact on children and women who require age and gender sensitive interventions. Ignoring these challenges can be a boomerang not only for Bangladesh but also for the rest of the world by deteriorating regional stability. As international aid dwindles, Bangladesh faces increased challenges in managing this besieged community. In addition, the unavailability of funds at the right time can put immense pressure on Bangladesh to provide essential services to these displaced refugees. Many local NGOs are now providing humanitarian aid to the Rohingya with their own funds, which will not last much longer without outside donations.

The best way to counter the aforementioned challenges is to ensure a steady financial flow which cannot be supported by Bangladesh alone. To close the funding gap, the government of Bangladesh can launch a joint fundraising campaign to pool contributions from individual and institutional donors by convincing them to reach out to distressed Rohingya people who have limited access to the needs of based. Bangladesh should spare no effort to ensure that the Rohingya issue is not sidelined and that international attention remains on it. To gain the attention of the international community, Bangladesh must keep the agenda alive through strong diplomatic maneuvers underlining how insufficient funds are intensifying the trauma already inflicted on the Rohingya. Bangladesh must echo this question in various regional and global platforms to guide the humanitarian response following the funding cut. In addition, it is equally important to focus on the efficient use of funds, which can be done by reducing foreign employees and involving more local NGOs.

Rohingya communities need international support more than ever. A well-coordinated humanitarian response is needed to alleviate the suffering of “Burmese nationals forcibly displaced”. The global community must wake up to deliver on the commitments made at the start of this crisis and should not place the burden on Bangladesh alone as the country is no longer able to bear the burden. The “Don’t hurt” This principle must be observed when providing life-saving assistance to the Rohingya in order to avoid inadvertently fueling new conflicts.

The shared efforts of the world community are necessary to achieve the condition required to end the plight of the persecuted Rohingya. The world must not turn its back on these vulnerable refugees and must stand shoulder to shoulder with Bangladesh to close the huge funding gap, which comes from foreign donors. The UN should play the role of torchbearer in bringing together global donors to deal with the financial pressure by highlighting how this can create an acute human rights crisis and exacerbate the circumstances in imaginable ways. While safe repatriation is the ultimate durable solution to the protracted Rohingya crisis, it is equally crucial to address Bangladesh’s growing challenges in welcoming the Rohingya by ensuring full financial assistance. The failure of repatriation and the lack of funding carry the risk of unfortunate developments, the toll of which the international community will not be able to avoid.

Kazi Mohammad Jamshed, Strategic Affairs and Foreign Policy Analyst, working as Assistant Professor in the Department of International Affairs at Dhaka University. He can be contacted at [email protected] or at +8801317280274